The Bond Bulletin: Jorrit, it was in 2006 that you and Merlijn Kuiper decided to found a Dutch James Bond website. It went online just a month before the premiere of ‘Casino Royale’ and has since delivered fresh news on an almost daily basis. Were there any particular challenges in integrating jamesbond.nl into the worldwide collection of Bond fan sites or did you actually fill a gap in the market with it being in Dutch language?

Jorrit: It took us many years to build our website and the fanbase within. We started with a simple site in Publisher and building form so on. James Bond Nederland is a hobby for Merlijn and me. And with the help from all our editors we made the website a success. There were some other Dutch James Bond websites in the past. But they all, except bondblog.nl, aren’t existing any more. So, we filled a gap in all the international sites. Our Dutch language is key for our Dutch and Flemish followers.

The Bond Bulletin: James Bond Nederland has come a long way in 13 years and there have been some mergers, f.e. with the 007nl forum and the Dutch Bond magazine ‘Bondesque’. What was the purpose behind these mergers? Was it a way of bundling the Dutch fan base and providing them with one single point of contact?

Merlijn and I believed that a widespread international network is key for our website.

Jorrit: Good question. Before James Bond Nederland Merlijn, myself and some of our editors were members of 007nl. The majority of the editors were not willing to arrange international contacts. Merlijn and I believed that a widespread international network is key for our website. So, we split up and started on our own. 007nl stopped after two years and some of the existing members decided to start the 007nl forums. That wasn’t a success, so they joined us. Bondesque magazine was a wish from Merlijn. But just after three editions it stopped because we did not have the time anymore.

The Bond Bulletin: Although the output of James Bond Nederland across all media channels is fantastic and your Facebook followers are about to crack the 4.000 mark – a number significantly higher than some other fan sites including the James Bond Club Germany and indeed The Bond Bulletin – there seem to have been no aspirations to open a Dutch James Bond fan club. Why is that?

Jorrit: This is an easy one. James Bond Nederland is or hobby. We are not getting payed for the website and we are doing it for free. All in our spare time. That is the luxury we have. We don’t have any deadlines that could affect our personal and working lives. So that the reason that we are not the Dutch James Bond fan club.

The Bond Bulletin: What do you think are the greatest advantages of being a member of the global James Bond community, especially in the digital age where everyone can connect to anyone?

Jorrit: When you have a question for your colleagues (that is how I see all the other fan clubs and sites) you just send an e-mail, call them our text them in an instant. That is a big advantage for the important international network that Merlijn and I have. Facebook is core for the James Bond international community.

I’ve made a trip with my dear friend Allard last year and most of the contacts where made by Facebook. So, if want to get something done in the community: Get Facebook, (laughs). Some of those contacts are great people that I’d love to see more often. But they live from the United States to Sweden, Germany, Finland, Spain, Austria and so on!

I’ve made a trip with my dear friend Allard last year and most of the contacts where made by Facebook. So, if want to get something done in the community: Get Facebook, (laughs)

The Bond Bulletin: One particularly nice aspect ofattending the various Bond events across Europe is the chance, to meet stars in person. What encounter with a cast or crew member of the Bond family did you enjoy the most? Have you ever been disappointed by one who was not as nice as you thought?

Jorrit: I’m delighted that I got the chance to meet a few stars in person. I’ve met Sir Roger Moore and George Lazenby. There is a story about Moore that is worth mentioning. I got the chance meeting him and Lady Moore at a Bondstars event. But I got sick, so it was not possible. I was guttered.

A few months later Merlijn called me. He said; Remember Sir Roger? You’re going to meet him! And I got the chance! Roger was very charismatic and friendly! I also got the opportunity to meet Thomas Wheatley, Nikki van der Zyl, Norman Wanstall, John Moreno, Derek Lyons and many more. The memories about the names mentioned are very important to me.

He (Merlijn) said; Remember Sir Roger? You’re going to meet him! And I got the chance! Roger was very charismatic and friendly!

The Bond Bulletin: If you could pick two Dutch actors to star in a Bond film as a Bond Girl, villain or henchman…who would you pick? Who are the hottest Dutch stars at present?

Jorrit: You have probably heard about Carice van Houten. She had a role in Game of Thrones (2011-). But she is not my choice for a part. I think Michiel Huisman is a good henchman. Sylvia Hoeks was in Blade Runner 2049 (2017). She could be a Bondgirl. But the people that I mentioned are in Hollywood productions. So, let’s go back to our in Holland actors. I think that Jacob Derwig could play a great villain, Anna Drijver a Bondgirl and Tygo Gernandt a henchman.

The Bond Bulletin: If I ask you to completely delete two scenes out of your favourite James Bond film, what film are we talking about and which scenes need to go?

Jorrit: Haha, that’s a tough one! My favourite James Bond movie is The World is Not Enough (1999). I think that many people are shocked now! Denise Richards as Christmas Jones was a mistake. So, if we could delete the scene where she says that somebody’s gonna have her ass would be appreciated! The next one not one scene. But please could Christmas Jones in the whole movie stop screaming about Jamesssss!!!  That is so A View To A Kill (1985) territory!

The Bond Bulletin:Can you construct an exquisitely sexy Bond girl name out of actual Dutch first names and words?

Jorrit: This is one for the Dutch speaking folowers of The Bond Bullitin then: Conny Keessen. She’s an actual freelance journalist and here name is translated as cannot have sex! (laughs) 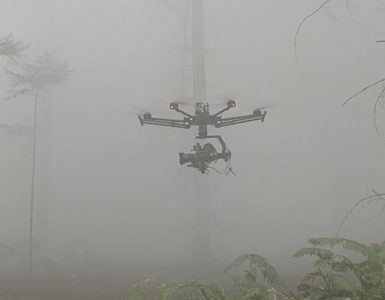